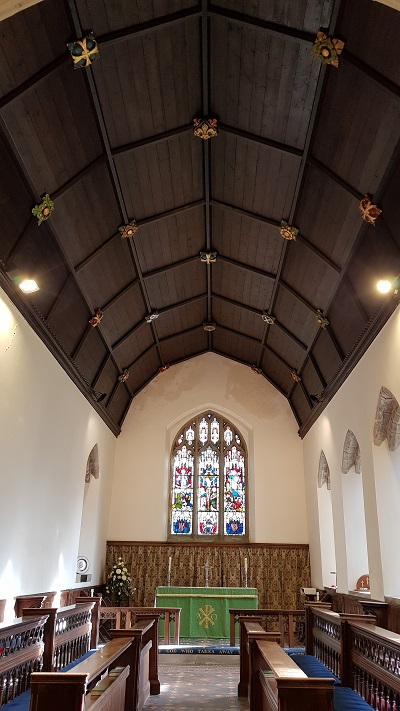 The Story of WHITBURN PARISH CHURCH

This stately parish church is not only a worthy and seemly house for the worship of God, but, as in the case of many of our old parish churches up and down the country, it contains much that recalls and illustrates the past history of the beautiful countryside in which it is situated, and enshrines memories and associations which the inevitable march of progress has effaced outside its venerable walls.

The church itself, though now so near the town is, in all its architecture and appointments, a typical country parish church.

For nearly seven centuries it has stood on its elevated mound overlooking the North Sea, and the views that can be obtained from the churchyard in all directions are extensive and striking. The surroundings of the church are of outstanding beauty and the approach, either from the village street or by the pathway from The Bents, leading to the Church Lane, with its canopy of overarching trees, and to the Lychgate, cannot fail to charm.

Not much is known about the early history of the building and it is one of those rare cases in which no record of the dedication of the church remains. It is almost certain, however, that it was dedicated to St. Andrew, and this is confirmed by a piece of information given in the account of The Pilgrimage of Grace published by the Cambridge University Press in 1915.

It appears that a spy, James Crane, who was travelling on board one of the ships of the fleet accompanying King James V to Scotland, landed in the neighbourhood with a party of Frenchmen and Scots. At Whitburn he heard the parish priest, Robert Hodge, acting as assistant to the then Rector, Dr. Marshall, speaking against the King of England in terms of disaffection and expressing readiness, together with that of many of the parishioners and neighbours, to welcome James V.

In his reports to his master, Thomas Cromwell, Crane stated that the place was Whitburn and expressly refers to the church as being dedicated to St. Andrew and as having a steeple which was used by mariners as a "Sea-mark." Enquiry was made, and the statement proved to be true.

Robert Hodge was examined by Norfolk and his Council; he confessed to his seditious utterances and on September 22nd, 1563, together with two unnamed mariners one of whom was the leader of the fishermen, was hanged in chains at Newcastle-on-Tyne.

The name of Whitburn, according to Boyle, is derived from the AngloSaxon work, Kwit-berne, or White-barn which could only relate to the Tithe Barn, in the Hall grounds and bombed in the 1939 war, which has probably existed from the foundation of the church. This would give a date earlier than 1245 for the foundation of the church. In the Boldon Book (1180) one John de Whitburn is said to hold 60 acres and one toft, for which "he renders eight shillings and goes on the Bishop's errands. "

The first recorded date in it is of rectors in 1245 which appears against the name of John de Ryegate, the second of the long list of rectors.

The church is a well-proportioned building and is a good example of the typical English parish church. It does not contain any striking architectural features, but it will be at once noticed by the visitor that a contrasting note is struck by the south and north aisles: the former with its sloping roof and parapet, the latter with its higher wall and steep pointed roof. The tower, 79 feet high, is massive and well-proportioned and admirably suited for the guidance of mariners at sea.

The church is described by Boyle as being entirely of the original earlier thirteenth-century work, except the upper stage of the tower. This was added in the fifteenth century. In the lower stage there is a round-headed light on each side, but three have been blocked with masonry. The later upper stage has a window of two lights on each side.

There are two bells, dedicated respectively to St. Andrew and St. Mary, both pre-Reformation. They are inscribed as follows: "S. Andrea ora pro nobis" and "S. Maria ora pro nobis." Under the first initial of the first inscription is a representation of the martyrdom of St. Andrew; and in the corresponding position beneath the second inscription is a similar representation of the Virgin and Holy Child. The arch which opens from the tower is of three orders, of which the two inner are of ancient workmanship.

By looking at the east window from the west end of the church it will be seen that the chancel has a slight inclination to the north, fairly common practice, which is said by some to symbolise the drooping head of the Saviour on the Cross. Chancels of this kind are generally known as "Weeping Chancels. "

The nave arcades of the church present a somewhat unusual example of transitional work. Though all are, apparently, of one age the capitals of the pillars of three distinctly different sizes. There are four ancient windows in the south side of the chancel, and one on the north side. All have been restored, but the original inner arches remain.

There is in the south side of this Chancel a low south window now concealed behind the Rector's Stall. The tracery is of the date, 1860, when the church was restored. It certainly was originally the Rector's own doorway to the Chancel, of which he held the freehold and was only converted as a window in 1867. It certainly is not a leper squint. There is no "squint" about it.

Possibly the most ancient, and certainly the most interesting, architectural feature of the church is the peculiar window in the west wall of the south aisle, which is known as the "Vesica Piscis" or "Fish Window. " This window, which is of oval shape, is cut out of four rough pieces of stone, and represents, roughly, the shape of a fish, the ancient symbol of the Christian Church with its curious play on the letters of the Greek word ichthus (fish) and still used by the Pope when seating important documents.

Another interesting relic in the wall of the south aisle west of the porch is a mediaeval grave cover which has been built in to the wall. The inscription is almost obliterated, but has been conjected as: “Duro dormes surgere quod esti.”, “I last for ever; thou sleepest to rise what thou hast been.”

Outside the West Door is an old stone coffin found during the 1867 restoration. The only thing we know about it is that sometime a woman was buried in it. We see this by the scissors carved on the old lid. These were in use from the ninth to the thirteenth century, but only for the burial of people of distinction.

The church contains an example of a very late supulchral effigy resting on an altar tomb. The effigy is that of Michael Mathew, of Cleadon, who died in 1689. Surtees describes the figure as that of a plump, stout, elderly gentleman in the full stiff dress of 1689. He wears a full periwig, neckcloth with square ends, coat with large buckrammed skirts, embossed buttons, wide sleeves and cuffs, doublet, rolled breeches, and square laced shoes with huge bows of ribbons. The head rests on a pillow, the right hand holds a book open at the text, “I shall not dye but live.”

There is a skull between the feet on the upright of the tomb. Represented in basrelief is the same figure with a lady in corresponding dress on either side of him, and on the east and west are upright texts of scriptures.

At the spring of both the inner and outer arches of the south porch are sculptured heads — the inner being of much earlier date. It appears from the Registers that a clock, with three dials on north, south and east respectively was erected in 1753. There is an old Sundial on the South side of the tower. It is now partly concealed by a modern dial. It is a pity that the passion for new things was allowed to conceal antiquarian features.

An interesting relic, now preserved in the vestry, is an old pitch pipe presented by V. A. Williamson, Esq. It must have been used for setting the pitch for the hymns before instrumental music was available. At a later date a sort of barrel organ was used. This remarkable instrument had a history of its own. Difficulty was sometimes experienced in stopping the mechanism, when the hymn had ended, and on occasion it was necessary to carry it out of the church to allow the service to proceed. Later on it was shipped to Australia by Mr. Cuthbert Hutchinson but the ship sank and the organ mercifully went down with it.

The Registers of Whitburn parish (which includes that of Cleadon) commenced with Burials 1579 Marriages 1579 and Baptisms 1611. They contained much of interest in addition to the ordinary routine entries of Births, Death and Marriages.

In 1664, Thomas Tripett M.A., left a sum of £300 for the benefit of poor and deserving apprentices and thereafter are many entries of children being apprenticed through his benefaction, not only to mariners, but to weavers, musicians, masons, butchers, watch-makers and glovers.

Thomas Triplett was succeeded by Richard Hicks, who appears to have been a veritable "Vicar of Bray" and to have changed his views on conformity with the ups and downs of political intrigue. One entry about him, dated 1645, is written upside down in the Register, while a later entry, in 1663, gives the full text of the abjuration of the Solemn League and Covenant as read out by him in the presence of his congregation.

Several entries refer to the building, registering and selling of stalls or pews in the church, e.g., "Sept. 25th, 1769, Edward Hutchinson, mariner of Whitburn, hath this day sold to Sir Hedworth Willamson, Bart., and his heirs for ever the said pew for the sume of £5."

In connection with Parochial Church Councils it is interesting to note that the first record of men elected to parochial and Church matters in the parish of Whitburn is 1643, when twelve were elected — afterwards increased to twenty-four.

Another entry, dated April 24th, 1674, refers to the appointment of a woman churchwarden, which proves to no such a modern innovation as some people would think.

As might be expected in the annals of a fishing village on a stormy coast, there are many entries of fatalities by drowning. In 1795 there occur numerous entries relating to deaths of soldiers, which leads to the conjecture that some fatal malady had broken out amongst some troops garrisoned in the vicinity. Several belonged to the 84th Foot and other regiments.

An ancient wedding custom which, if not unique is very uncommon, has been in vogue at Whitburn for many generations. It consists of the presentation to the bride, bridegroom and other attendants on leaving the parish, of a "Hot Pot" consisting of a compound of mulled ale and spirit, with the addition of spices, according to a recipe which has been handed down from generation to generation. The custom is still observed at infrequent intervals.

THE RECTORS OF WHITBURN